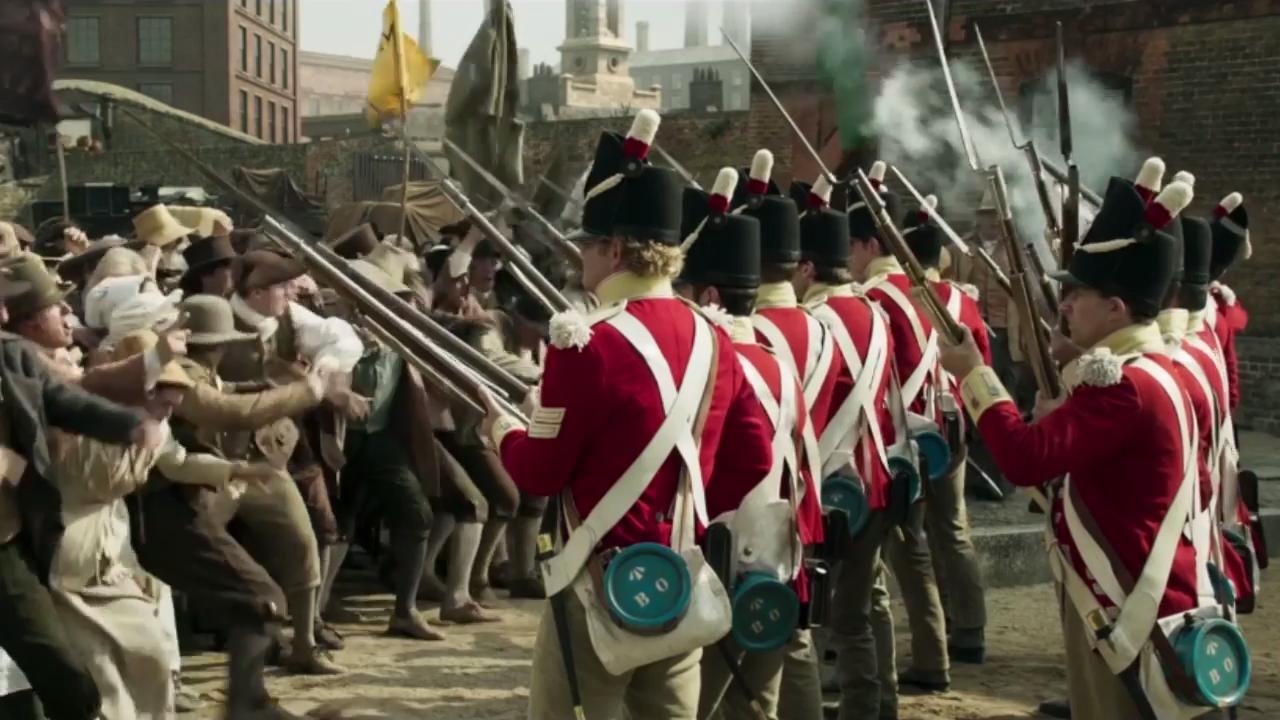 Sponsored by the British Consulate of San Francisco

Esteemed British director Mike Leigh brings to life one of the bloodiest and darkest episodes in British social history, the infamous Peterloo Massacre of August 16, 1819. Representatives of the Tory government ordered a regiment of regular cavalry, abetted by local mounted militia and hundreds of infantry and special constables, to charge, sabers drawn, into a working-class crowd of 60,000 who had gathered for an entirely peaceful rally—calling for parliamentary reform—in St Peter’s Field, Manchester, England. Bands played “Rule Britannia” and “God Save the King.” Banners spoke of “Liberty and Fraternity”. But the authorities feared an outbreak of violence that might foment bloody revolution. The storming of the Bastille that sparked the French Revolution and the ensuing “Terror” and the American Revolutionary War were all within living memory. Eighteen people killed; more than 650 severely injured. The brutal “Peterloo Massacre”—named by a local newspaper, to echo Britain’s defeat of Napoleon at the Battle of Waterloo — triggered a national outcry that proved to be a turning point in the slow, but inexorable evolution of British democracy. This is Mike Leigh’s largest cinematic canvas to date, and he uses a notable ensemble cast headed by Maxine Peake (in person at the festival) and Rory Kinnear. Immersive, impassioned, meticulously crafted, the film brims with contemporary relevance. Why is Peterloo important?  Because people died there simply for asking for the right to vote. UK 2018 (154 minutes)

English actress Maxine Peake will join us at the festival with two of her new films, which she will introduce and participate in a Q & A following the screenings. She stars in “Peterloo,” as the mother of a young British conscript in this story of the infamous 1819 massacre at Peterloo. In “Funny Cow” she plays a female comic attempting in the 1970s to find a place in England’s comedy circuit. The Guardian wrote of her performance “Peake rises magnificently to the challenge of the role, her face flickering between a practical smile and a silent scream.” She is a regular on the Hulu show “The Bisexual” and is known in the UK for lead roles in the TV series “Dinnerladies” and “Shameless.” She has also appeared in “Black Mirror” and the movie “The Theory of Everything.” Her stage work includes the title characters in “Hamlet” and “Miss Julie” and as Blanche in “A Streetcar Named Desire,” a performance The Guardian described as “exquisite” and “breathtaking.” Introduced by star Maxine Peake and Board Member Tony Broadbent. Miss Peake will be interviewed following the screening by Mostly British Senior Programmer Maxine Einhorn.