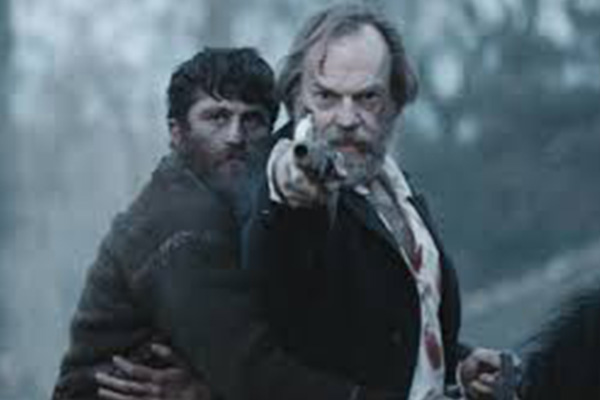 Due to technical difficulties at the Vogue Theater, Black ’47 will be played at the Balboa Theater (3630 Balboa Street, San Francisco) on Sunday, February 17 at 7:30 PM.

Irish filmmaker Lance Daly takes on the Great Famine and its worst year, 1847, resulting in a powerful revenge tale the Guardian calls “harrowingly effective.” Australian actor James Frecheville ( “Animal Kingdom”) gives a coldly terrifying performance as an Irishman who deserts from the British army and returns to his homeland to discover the truth about how his family has been tyrannized and allowed to die in squalor and misery. He is pursued by disgraced English soldier-turned-policeman (Hugo Weaving), a drawlingly arrogant officer (Freddie Fox), and a tracker-guide (Stephen Rea from “The Crying Game”). The superb cast is rounded out by Jim Broadbent as an evil absentee landlord. This viscerally tough, insightful film contains lively historical detail concerning the exploitation of Irish Catholics, including a riveting scene showing “Souperism,” wherein evangelical Protestants offered a meal to poor, starving Catholics in exchange for conversion. A huge hit in Ireland, the film benefits from the majesty of cinematographer Declan Quinn’s wide vistas. Irish 2018 (100 minutes)