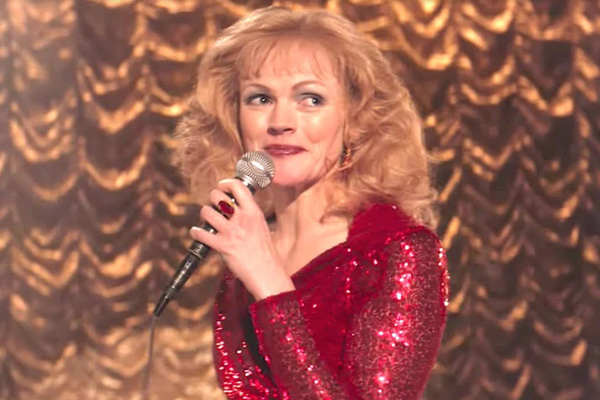 Maxine Peake (appearing in person at Mostly British) kills as they say in the comedy trade, playing the title character with unflinching boldness and grit that absolutely mesmerizes. As a female standup comic trying to make it in the northern working men’s clubs of the 70s, she confronts the unrelenting sexism and violence surrounding working class women in Northern England. Through a collage of flashbacks, we learn how resilience was knocked into her by an abusive father, husband, and broken alcoholic mother. Funny Cow stands a vibrant, firebrand dressed in red with corkscrew blonde hair and bright red lips, using comedy as her lifeline, amid a dreary, harsh, grimy cityscape. She has a fur coat and fancy sports car for comfort but they can’t erase the deep hurt in her soul. This film makes us uncomfortable. We may not laugh but we will think. Remember Archie Rice in The Entertainer – he was “dead behind the eyes”. Funny Cow calls herself “a monster behind the eyes”.  But no, she is just trying to survive and we applaud her for it. Miss Peake and board member Tony Broadbent will introduce the film and participate in a Q & A following the screening.

English actress Maxine Peake will join us at the festival with two of her new films, which she will introduce and participate in a Q & A following the screenings. She stars in “Peterloo,” as the mother of a young British conscript in this story of the infamous 1819 massacre at Peterloo. In “Funny Cow” she plays a female comic attempting in the 1970s to find a place in England’s comedy circuit. The Guardian wrote of her performance “Peake rises magnificently to the challenge of the role, her face flickering between a practical smile and a silent scream.” She is a regular on the Hulu show “The Bisexual” and is known in the UK for lead roles in the TV series “Dinnerladies” and “Shameless.” She has also appeared in “Black Mirror” and the movie “The Theory of Everything.” Her stage work includes the title characters in “Hamlet” and “Miss Julie” and as Blanche in “A Streetcar Named Desire,” a performance The Guardian described as “exquisite” and “breathtaking.”