New movies, old classics, Hollywood stars and true stories are in the lineup of the eighth Mostly British film festival in San Francisco. 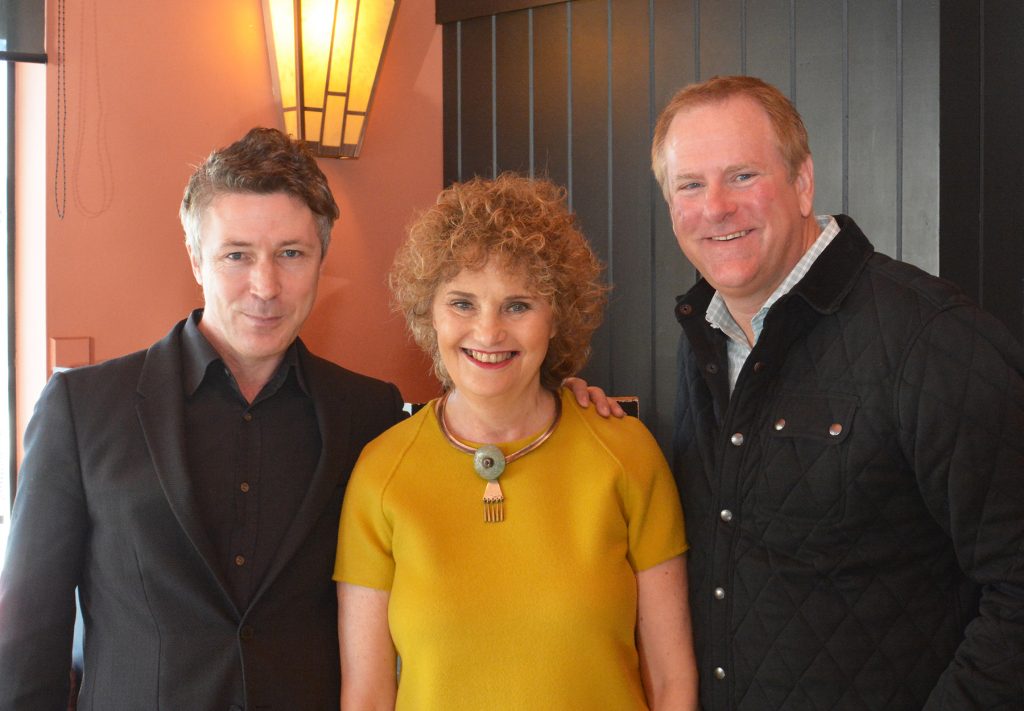 Showcasing films from the U.K., Ireland, Australia and India. the festival opens at 7:30 p.m. Feb. 18 at the Vogue Theatre with Kate Winslet in “The Dressmaker.” The 2015 film from Australia is a 1950s-era revenge comedy by Jocelyn Moorhouse (“Proof,” “A Thousand Acres”), who cowrote the screenplay with her husband P.J. Hogan, director of “Muriel’s Wedding” and “My Best Friend’s Wedding.” Winslet plays a famed fashion designer who returns to her childhood home in a backwater town, from which she fled as a teen. Judy Davis plays her ailing mother, Liam Hemsworth is the love interest, and Hugo Weaving is a cross-dressing cop.

The 28-film schedule also includes an appearance by Aidan Gillen (of “Game of Thrones” fame) for a 6:15 p.m. Feb. 21 screening of “You’re Ugly Too,” He stars in the 2015 Irish road flick by Mark Noonan, which describes the adventures of a convict (Gillen), who gets released from prison in order to care for his recently orphaned, sassy preteen niece (Lauren Kinsella).

British filmmaker Joe Stephenson also will attend a screening of “Chicken” at 5 p.m. Feb. 23. His debut 2014 film about two brothers living a tenuous existence in the English countryside (one has learning difficulties and a chicken for a best friend, the other is a bully) has been noticed for its tenderness and emotional charge.

Documentaries are represented by Gillian Armstrong’s “Women He’s Undressed,” which tells the story of little-known Hollywood designer Orry-Kelly, an Australian who headed Warner Bros. costume department in its heyday. He made fabulous clothes for Humphrey Bogart, Errol Flynn, Bette Davis and Marilyn Monroe in “Some Like It Hot,” among others. The film screens at 7:15 p.m. Feb. 20.

British noir night, on Feb. 19, includes Richard Widmark in “Night and the City,” and Bob Hoskins in “The Long Good Friday.” while the Academy Awards are covered with “Rebecca” and “Secrets & Lies” on Feb. 20, and “The French Lieutenant’s Woman” and “The Prime of Miss Jean Brodie” on Feb. 21. The Oscar-nominated and winning films screen at the Balboa.

The closing night screening — at 7:30 p.m. Feb. 25 at Alamo Drafthouse in the Mission — is “A Royal Night Out.” The romantic dramedy stars Sarah Gadon and Bel Powley as young princesses Elizabeth and Margaret, who venture out of Buckingham Palace and mingle with commoners on Victory in Europe Day in 1945.

It’s also an international festival with a cozy neighborhood feel, with virtually all screenings taking place in the friendly confines of the Vogue Theatre, a single-screen jewel in Laurel Heights.

For Anglophiles, as well as the city’s considerable Irish community, the festival offers chances to see films from their home turf that otherwise wouldn’t play in the Bay Area. Yet any film lover will find appealing things in this lineup of well-told, entertaining stories.

This year’s festival, which runs from Thursday, Feb. 18-25, includes the American premiere of “The Dressmaker,” starring Kate Winslet as a fashion designer whose work divides a conservative Australian town. Other offerings include:

One Million Dubliners: This superb documentary not only showcases Dublin’s beautiful Glasnevin Cemetery — the final resting spot of 1.5 million people — but also provides a soulful meditation on life, death and beyond. Serving as our tour guide is the affable historian Shane MacThomais, who with humor and grace shares insights about Irish culture and history. The final frames of this gem will take your breath away. 4:30 p.m. Feb. 21, Vogue; Ireland, 80 minutes.

Strangerland: Nicole Kidman is a sexually frustrated housewife whose dull life gets an unwelcome jolt when her two unhappy teenagers run away and go missing in the Australian Outback. This is hardly your typical kids-in-peril family drama, and Kidman courageously takes us to some unexpectedly dark places. The forsaken but beautiful desert landscape is an important character in this film, which will keep you guessing to the end. 9 p.m. Saturday, Feb. 20, Vogue; Australia, 112 minutes.

The Lost Aviator: British pilot Bill Lancaster is at the center of this formidable documentary, which chronicles a true story that has everything: a dashing aviator, a love triangle, a murder, a show trial for the ages and one final flight for redemption. Lancaster’s great nephew, Andrew, directs the well-made film, getting reticent family members to open up and showing no fear about delving into the mythical allure of Lancaster, who made the record books with his flight from England to Australia in the 1920s. 9 p.m. Feb. 22, Vogue; Australia, 90 minutes.

Here are some thoughts from “Game of Thrones” standout Aidan Gillen, who will be a special guest of the Mostly British Film Festival during the screening of his new movie, “You’re Ugly Too”:

On his familiarity with San Francisco: I have two cousins there who I have visited often. They’ll be at the screening (6:15 p.m. Feb. 21, at the Vogue). I love the city’s unique culture, atmosphere, climate and general vibe. I spent a lot of time under the Golden Gate Bridge with my camera, filming parts I saw from “Vertigo.” As a child, I watched “The Streets of San Francisco” religiously.

On his commitment to Irish cinema: I like doing the indie, low-key, low-budget projects, if the script is right. It’s not financially rewarding, but it’s important to do that in your native country. It’s a reinforcement of the Irish cultural stamp.

On why he was drawn to “You’re Ugly Too”: I liked the simplicity of it. And I like road movies. It was shot in three weeks. There weren’t extravagant resources, but we embraced that.

On the next season of “Game of Thrones”: Winter is coming. There will be quite a bit of snow this time around.

On developing his Thrones’ character, Lord Baelish: I pushed for the mustache and short hair. I brought in a picture of (British politician) Peter Mandelson, known as the Prince of Darkness.

On what’s next for Lord Baelish: Maybe we could expect some kind of atonement. We really don’t know what’s going to happen, which is tremendously exciting.

One of the highlights of this year’s program is Handsome Devil, a sure-fire crowd pleaser about two boarding school roommates, the wiry, red-headed Ned (Fionn O’Shea) and the athletic Conor (Nicholas Galitzine). Ned is a music-loving outsider, marked as a “fag” by Weasel (Ruairi O’Connor), the school bully. In contrast, Conor is a star rugby player and a hero at the school that treats the sport like a religion. The roommates are odd-couple opposites, but they start to bond over music, especially when their English teacher, Dan (out actor Andrew Scott), asks them to perform a duet for a local talent show. Although there is some palpable sexual tension between the boys during a practice session, the magic of Handsome Devil lies in the natural way the boys’ relationship develops and grows. They come to learn more about each other—and about themselves— as their friendship is tested by outside forces.

If the film puts a not-exactly unexpected twist on the familiar coming out/coming-of-age story, it nevertheless presents gratifying messages about pride, shame, and tolerance with humor and grace. There are also some nice, sensitive moments, as when Dan has a heart-to-heart with Conor.

The actors are all engaging, and the film’s soundtrack is terrific. It’s also hard not to feel a swell of emotion as Rufus Wainwright sings “Go or Go Ahead” during the film’s climactic scenes. Handsome Devil will leave viewers smiling from ear to ear.

A handsomely mounted period piece screening at the festival is A Quiet Passion, by gay filmmaker Terence Davies. This gorgeously lit biopic stars out actor Cynthia Nixon as poet Emily Dickinson, and reams of the poet’s verse is spoken throughout this talky drama.

First seen at Mount Holyoke Female Seminary, where she rebels against religion, Dickinson returns home, to Amherst, where she tells her father (Keith Carradine) that she wants to write (and publish) poetry. These are her initial expressions of independence, and throughout A Quiet Passion, Dickinson, along with her tart-tongued friend Vryling Buffam (a scene-stealing Catherine Bailey), take pains to assert themselves as they consider social mores and issues of love and marriage, religion and death, truth and experience.

Davies, who penned the screenplay, concentrates on episodic mini-dramas, such as Emily’s arguments with her brother Austin (Duncan Duff) over his extramarital affair, or her prolonged ill health. Despite the filmmaker’s noble efforts, however, A Quiet Passion is a portrait that is more stuffy than vibrant, and Nixon is rather starchy as the poetess.

Pawno is a sweet and sour Australian entry that showcases the lives of a dozen characters. Danny (writer Damian Hill) works for Les (John Brumpton) in his pawnshop in the town of Footscray. Les is no-nonsense, while Danny, who has a secret crush on Kate (Maeve Dermody), is more of a dreamer. They entertain—and are entertained by—the various denizens who enter the shop, from Tony (John Orcsik), a man with a naughty little secret, to Jennifer (Kerry Armstrong), a woman whose son has run away. One of the more touching moments has Les helping out Paige (Daniel Frederiksen), a transsexual who is harassed on the street and needs a loan. While most of the supporting characters have only one or two scenes, Frederiksen and Armstrong make their brief moments poignant.

Pawno doesn’t offer much in the way of dramatic tension, but there is a nice camaraderie between the characters, from Danny and Les in the pawnshop to Kate and her bookstore colleague, Holly (Naomi Rukavina), and Carlo (Malcolm Kennard) and Pauly (Mark Coles Smith), who are friends that hang out on the streets of Footscray.

A modest slice-of-life story, Pawno is hardly groundbreaking, but it is a passable time filler.

Also of queer interest are three older films screening at the festival. Underground, a recently restored 1929 silent feature, is the sophomore effort by gay filmmaker Anthony Asquith. The story, which Asquith also wrote, concerns Bill (Brian Aherne), a uniformed attendant in the London tube and Bert (Cyral McLaglen), a power station worker, who are both attracted to Nell (Elissa Landi). Melodrama, as they say, ensues.

Sidney Lumet’s sparking 1974 adaption of Agatha Christie’s Murder on the Orient Express features an all-star cast, including the late bisexual actor Anthony Perkins and the late gay John Gielgud as two of the suspects interrogated by Hercule Poirot (a fantastic, and Oscar-nominated Albert Finney). The film’s editor, Anne V. Coates, is being honored at the festival.

Lastly, Mona Lisa, the 1986 Neil Jordan film, gets a spotlight during the festival’s “Film Noir” night. The late Bob Hoskins gave a career-defining (Cannes-winning, Oscar-nominated) performance here as an ex-con who falls in love with the high-class call girl (Cathy Tyson) he drives around London. It is almost a spoiler to reveal the film has a queer twist.

Gary M. Kramer is the author of “Independent Queer Cinema: Reviews and Interviews,” and the co-editor of “Directory of World Cinema: Argentina.” Follow him on Twitter @garymkramer